Digging  up  my  past                   1450 ad   to today
This is not your usual genealogical chronicle of dead bodies !
Rather a story of my amazing Byrne family throughout some of the most turbulent periods in Irish history
> some highlights >>>>>
1575   Hugh geangagh ( the snubnosed ) was granted a lease of 21years from Black Tom the Earl of Ormond  of the large Anglo Norman castle in Clonmore, plus the Manor plus 11 townlands along with 8 acres of land at a rent of 20 Irish marks p/a !
1702   The Penal laws were enacted creating major problems over the following century.#
1736    Charles I was buried in Clonmore , We located and dug up his stone and his father's vault buried underground, hidden for years. On the stone was  his Coat of Arms ,see above, and inscriptions.
1791     The Rheims Bible, with inscriptions, handed down over the past  225 years.
1855     Original of Geralds death cert posted  by Dr. Corrigan of Arkansas, USA, to his wife Julia    in Ireland.
1841    Alfred ended up in Alderney, CI. after nearly 40 years in the British Army.
Daughter Florence born in Lucknow, India, during the mutiny.
His  Son Frederick Christopher " Incorigble and Worthless " who managed to be in
two different British Regiments at the one time ! #
1812       Charles II , reputed to be " the best Brandy drinker in the Kingdom " died in
​Boulonge, France at the age of 40!
And all generations verified by 4 DNA tests from being the very first Byrne    tested in 2005 by Paul Burns in my home in Wicklow.
and more ! >>
﻿Welcome to my family story stretching from Faelan,  King of Laighin  { Leinster } in 750 ad down through the Celtic Mists, The Uí Dúnlang, the medieval lordships of Laighin, the Sept of Uí Lorcan, the Sleaty Dynasty, to when the family broke up and scattered to Arkansas, India, Tipperary, Dublin, Wicklow and finally back to Carlow, 1250 years!
My researches started in 1981 shortly after my father died. A number of documents , land leases c:1700s, Family Bible 1791, Legal certificates, Pedigrees and a 1858 death certificate from a doctor in Arkansas, these were handed down thro the family and added to during the past 35 years.
A huge amount of work but immensely rewarding.
My  most sincere thanks to Eddie McDonald of Clonmore, Hughie O'Byrne of Aughrim, Austin Fennessy of Clonmel, Paul Burns of Tallahasse, Nic Burns of Michigan, Bill Byrne of Chicago, and many more including my dear wife, the sainted Anne, who is a brilliant digger of graves and provider of Haute cuisine and B and B accomodation for all and sundry. Many thanks to all who made such wonderful and amazing contributions that made this story possible.
​
Val Byrne, B.Arch., FRIAI,  Chieftain Emeritus, Clan O'Byrne, 2016ad. 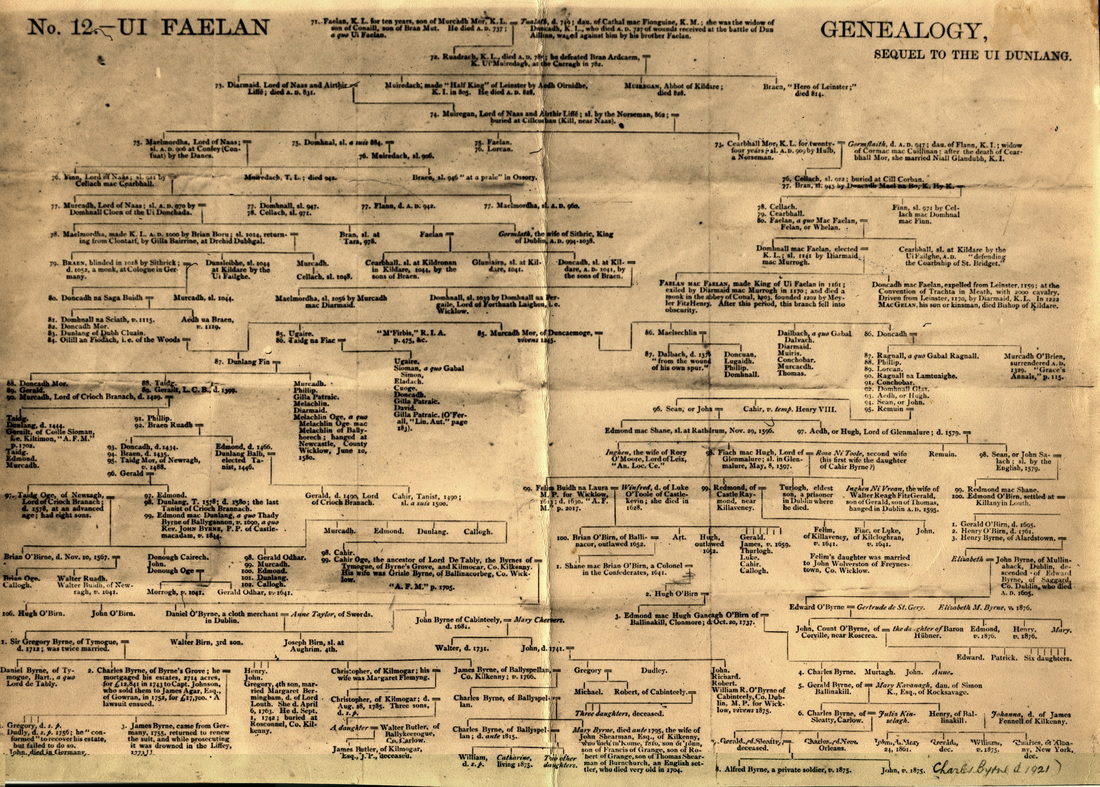 The Pedigree of uí Faelan from 737 ad to 1875 ad  by the Rev Francis Shearman,  presented to the Kilkenny Archealogical Society 1875. Known now to have a number of inaccurate connections which have now corrected by new research and DNA testing over the past 20/30 years.  A print of this chart was also included in my family papers and so it formed the basis and start of  this story.