Family Heirlooms, Original Papers and Copies of originals now in the Possession of the Family of Val Byrne. 2016.
The Rhemish Holy Bible printed in 1792.
A Roman Catholic production which I suspect would have been acquired by Julia, around the time 1852, when her two sons changed their religion back to RC before they emigrated to the USA.  Apart from personal beliefs RCs would have been more welcome.
There are many handwritten  inserts about family records such as births, marriages and deaths recorded thruout  the book. 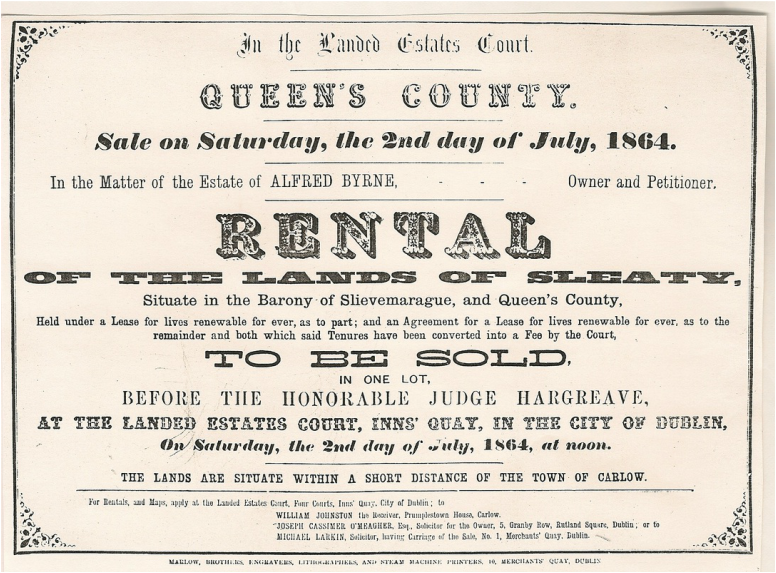 1864  End of an era.
Notice of the sale of the Rental from the lands at Sleaty by Alfred Byrne, this meant that any rents payable ( if collectible!) would be sold to the buyer at the auction.
This was an added problem for Eliza, mother of Alfred her eldest son ( her next son Charles was already working as a an apprentice in a drapers shop in Tullow).
​She was desperate.
Her husband Gerald of Arkansas Died ( G 5), unknown to her was dead.
So she looked for a job and managed to obtain a position as Matron in the Poor House in Kilmalock, Co. Cork , not an easy job during the height of the Great Famine period in Ireland.
From there her eldest son Alfred left to join a local militia and went on with a distinguished career in the British army up to when he retired in 1906 and went on to live the rest of his life in Portsmouth. He died in Portsmouth, England, 1916.
Shortly after he retired he returned to Ireland to visit his brother Gerald in Clonmel in 1907
Eliza eventually joined her daughters in Kingstown (now DunLaoire, Co. Dublin. ) where they opened and ran a drapery shop.  All four female descendants of the Byrne Dynasty died and are buried in an unmarked grave in Deansgrange Cemetary , Co. Dublin.
Check date and Grave No.
BACK to the Begining